I spoke to friend Herb Scrivener, owner of Zook’s Fabrics in Intercourse, PA. Herb is English and bought the popular shop from its Amish owner, Lizzy Zook. Zook’s is spacious and a feast for the eyes. The majority of the fabric is a plethora of vibrant colors and designs. Decorative fabrics are purchased either by English for their own use, or by Amish to sew items like potholders or pillows, or fabricate quilts, aprons, and gifts for tourists. 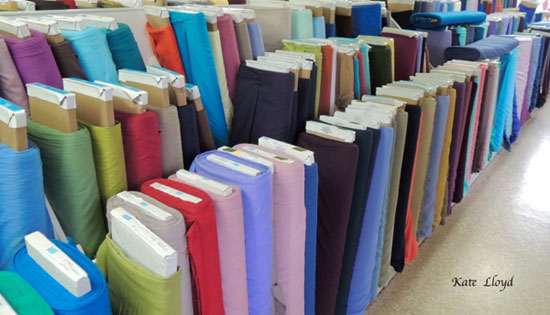 Bolts of solid colored fabric, which the Amish use to sew their own clothing, are displayed near the store’s front door. Not only may Amish women work in Zook’s, owned by an Englisher, but they also come in to purchase fabric.

Keeping in mind that all church districts have their own Ordnung (rules they must obey), I asked Herb the same question I’ve asked several Amish women: May Amish wear red in this District? All emphatically assured me younger Amish women wear red, with a black apron. I was surprised, as I’d assumed they were restricted to maroon or burgundy. In fact, one Old Order Amish woman told me, “Sometimes guys will wear red shirts to match their girlfriend’s dress.” The older women continue to wear traditional dark colors, such as sage green, navy blue, or charcoal gray. 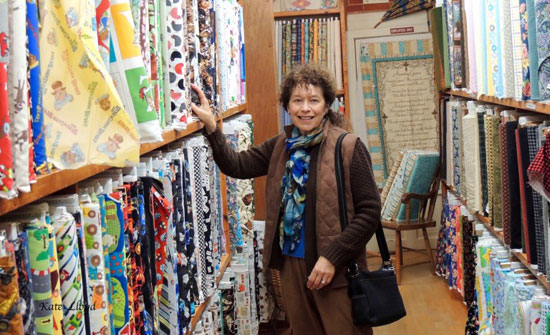 Zook’s doesn’t carry yarn, but Amish-owned Nancy’s Notions, a business attached to the rear of Zook’s, does. I called Nancy’s. The salesperson, an Amish woman I’ve spoken to on several occasions, said the yarn is mostly bought by Englishers as the Amish in her area do not knit. An Amish friend in Indiana echoed the same opinion. “They do crochet baby blankets and doilies, but not sweaters.” In Lancaster County the Amish are more apt to wear solid black sweaters bought at Nancy’s Notions or Walmart. 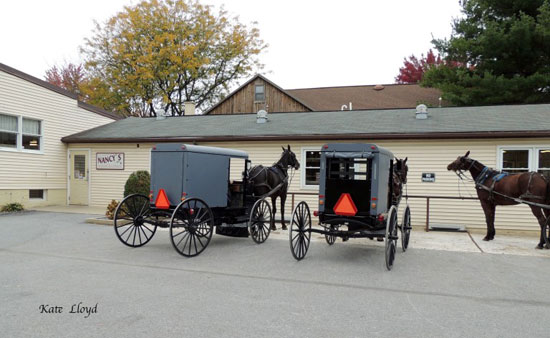 Nancy’s Notions is a fun place to see where the Amish shop in Lancaster County, PA.

What else might they buy at Walmart? The younger women might purchase a modest bathing suit, and if they’ve recently had a baby, they can head to sites like Hermoza (check this out here) to see their collection of Postpartum bathing suits while women over thirty may prefer to sew their own, or wear a T-shirt over shorts. In Lancaster County, Amish women also shop in the outlet stores.

The Amish are a fascinating group and their customs vary from district to district, in locations all across North America and Canada.

Another surprise was that one of Herb’s Amish saleswomen rides a motorized scooter to work. By scooter, I mean low-to-the-ground conveyances many Amish propel with a push of the foot, as Amish are not allowed to ride bicycles in Lancaster County. This ingenious scooter is powered by a battery.

Herb let me in on a controversy five years ago surrounding organdy, the delicate, white fabric used for sewing women’s aprons and unique heart-shaped head coverings – Kapps. For decades Zook’s was one of the few places to buy the exquisite and expensive organdy imported straight from its Swiss producer. A new organdy is now available at one-third the cost, is easier to handle, and lasts two to three times longer. Some districts did not initially allow the new organdy, but according to Herb it is now accepted throughout the area. Keep in mind that there are almost two hundred church districts in Lancaster County and each has its own Ordnung.