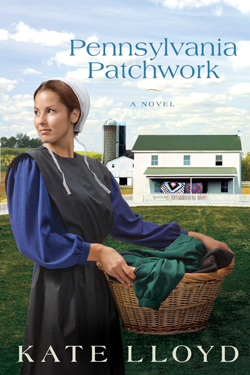 Meeting the family her mother had kept hidden from her, Holly comes face to face with her real-life and blood legacy. She also falls for charming Zach, a handsome Mennonite veterinarian who seems to be everything she’s wanted in a husband. And Zach proposes marriage. Her mother and Amish grandmother think she’s rushing into a commitment with a man she barely knows and who harbors a dubious past. Holly is in love with Zach and ignores their warnings.

Until she meets an attractive Amish man.

And an old suitor shows up.

Endorsements – What people are saying about “Pennsylvania Patchwork”

Book Review by Rhonda Gayle Nash-Hall, Christian Women’s Affiliate Reviewer, Rhonda’s Doings!, July 19, 2013:
“Kate Lloyd has done an incredible job of melding the Amish and English world in Pennsylvania Patchwork. I did not read book #1 of this series as I did not realize there was another one and a few times, I was wondering what I had missed but Kate does a great job of filling in the blanks for readers. I do want to find book 1 and read it now though.”

Book Review by Carrie from Farming on Faith:
“This book has many facets to keep you entertained for sure. If you are a person who likes deep books ~ this book is for you. I had a hard time keeping focused at first but once it captured my attention I could not put it down until I had finished it.”

Book Review by Mary Jackson from The Mary Reader — 5-Star!
I have to say a lot of the Amish authors are writing the same stories over and over again, but not Kate this was such a great and very touching read. I highly recommend this book.

“The sequel to Leaving Lancaster starts where the first book ended, with the likable characters leaning on their beliefs to guide them. Lloyd’s research on the ways of the Amish of Lancaster County shines in this outing.”

“Love is in the air in Kate Lloyd’s Pennsylvania Patchwork as the tale continues of three generations under one roof. Holly Fisher has been looking for love and suddenly finds herself pursued by multiple suitors. Her very Amish grandmother, Anna, disapproves of Holly’s choice (a Mennonite vet) and takes pains to end the romance. Esther, Holly’s mother, has a love story of her own brewing. Then an unexpected delivery forces Holly, Esther and Anna to face issues long ignored and, surprisingly, brings healing and forgiveness. Lloyd’s very enjoyable read has just enough twists, turns, and romance to delight the Amish fiction reader.”

“Amish romances are one of my favorite genres because of the comfortable pacing that echoes the slower pace of the Amish lifestyle. I enjoyed how Lloyd let the thread of her story unwind and gave us ample opportunities to get to know her characters. I was definitely kept guessing who Holly would end up with until the very end of the book, because two out of her three suitors were highly eligible.

I also liked the interplay between the three generations of women, and all the mysteries Lloyd threw into the story.”

What Readers are Saying About Leaving Lancaster

I loved the book. I was hooked after the first book and had to find out what happened. I was not disappointed. Looking forward to a continuation of Holly and Zach and Esther and Nathaniel’s lives.

Amazing read, I was hoping it didn’t have to end the characters were amazing.

This is the second book in the series I have read. It almost makes me want to go Amish. I enjoyed this book! … I enjoy this author. She makes you feel like you are there with this family, being a part of their life. I recommend these three books to anyone who likes good wholesome reading!

Amish with a twist!   I like to read Amish romance novels but this one was delightfully different. I’ll be looking for more Kate Lloyd.

Pennsylvania Patchwork is the second book by author Kate Lloyd that I have read. I loved book one in this series, Leaving Lancaster, and didn’t see how Pennsylvania Patchwork could top it. Guess what? It did! I was glued to each and every page to see how this story would play out. … I urge everyone to buy this book. I highly recommend that you buy and read the first one, Leaving Lancaster, before reading this one. I wouldn’t want you to miss a thing! I can’t wait to read the last book in this trilogy, Forever Amish.

I really enjoyed Pennsylvania Patchwork. Getting to know all of the different family members and the history behind the family squabbles. Apparently the Amish aren’t perfect either. I just realized that I am reacting as if this is a true story instead of a novel. That tells you how good the author is. She makes you feel like you know these people. I want to read more.

I thoroughly enjoyed this story. Never a lagging spot along the way. She had me wondering about how the ending would turn out. I never figured the outcome till I got to it.  This story deals with the ups and downs of mother – daughter relationships, with religion, with love and courtship at different ages, and with relying on God to handle the outcome in all these areas. I most heartedly recommend reading it and suggest reading the first book: Leaving Lancaster first, for the background.

This series is incredible! This is the first time I’ve read Kate Lloyd and I am so pleased. These two books were so exciting. Frustrating at times and irresistible. I have been a fan of Amish fiction for quite awhile but leave few recommendations or reviews. I am Kate Lloyd fan for sure and for certain!